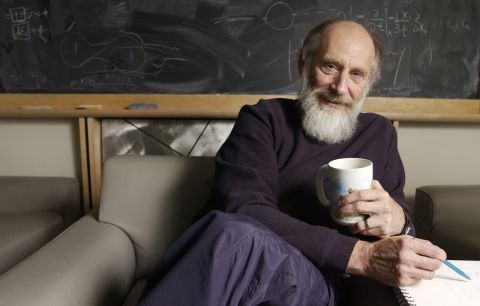 Professor Susskind received his PhD from Cornell University in 1965 and has taught at Stanford since 1979.  In 1997, Susskind was awarded the J.J. Sakurai Prize for his "pioneering contributions to hadronic string models, lattice gauge theories, quantum chromodynamics, and dynamical symmetry breaking."

Susskind is widely regarded as one of the fathers of string theory, having, with Yoichiro Nambu and Holger Bech Nielsen, independently introduced the idea that particles could in fact be states of excitation of a relativistic string.  He was the first to introduce the idea of the string theory landscape in 2003.

According to colleagues, Professor Susskind's hallmark has been the application of "brilliant imagination and originality to the theoretical study of the nature of the elementary particles and forces that make up the physical world."

He is the author of two popular books on modern physics: The Cosmic Landscape, and the bestseller The Black Hole War, which describes how, over the course of 25 years, Susskind ultimately convinced Stephen Hawking that Hawking’s theory of Black Hole entropy was incorrect.

His current work on black hole firewalls is discussed in this New York Times article.  He recently gave a lecture on the topic at the Kavli Institute for Theoretical Physics (UCSB), and co-authored a paper with Juan Maldacena that proposes Einstein-Rosen bridges as an alternative to black hole firewalls.